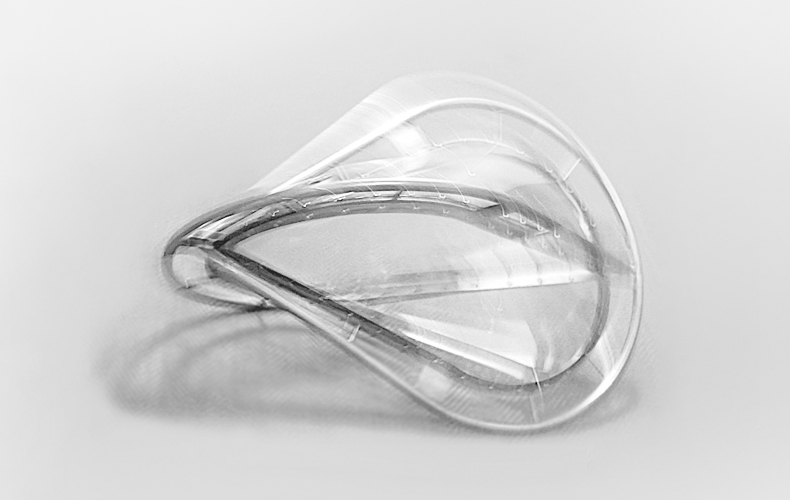 The oloid is a roll body whose form being geometrically developable by inversion of the cube.

The oloid can easily be moved on a plane generating a tumbling pulsating movement – the motion of inversion.

Inversion: The tumbling motion, characteristic of the oloid. It represents a third kind of movement: a rhythmically pulsating figure-eight movement, the so-called lemniscate.

The lemniscatic motion of inversion, with its swinging, rhythmically pulsating movement of inversion, comes much closer to our daily surroundings than the rotary motion which is determined by its rotation around a centre, by high pressure and centrifugal forces pushing outwards.

Following the course of the lemniscate, one can observe that when the plane is tangent to the inner surface of a torus, the cross section takes on a figure-eight shape. It is a motion of levity needing only a light impulse at the point of intersection in order to continue oscillating.

In nature, we find this movement in natural watercourses which in their meandering are striving to form a lemniscate. Cut-off meanders of rivers, e. g. the Rhine, are the result of water’s basic movement, when meander loops are getting ever closer to each other, finally opening up.

Thanks to the motion of inversion we have the transition from a life-destroying rotary technology to that of a life-fostering technology which works with pulsating rhythm and the forces of levity. This principle of motion offers a wide range of practical applications e.g. purifying and treating drinking water, as a means of propulsion in navigation, as stirrer in biotechnology, as mixer (Turbula) in the pharmaceutical industry.

Sonett uses the oloid as mixing and rhythmizing device for the production of the balsamic detergent additives.

The tumbling motion,
characteristic of the oloid