Sonett, laundry detergents and cleaning agents
respecting water as the essence of all life

Caring and feeling responsible for water as the essence of all life made Sonett come into life. Water per se is the actual laundry detergent and cleaning agent. By using readily and completely biodegradable raw materials, such as pure plant-based soaps, sugar surfactants, and minerals such as sodium carbonate and silicates, we increase the cleansing performance of the water, at the same time fostering its being returned to and reintegrated into its natural cycle. 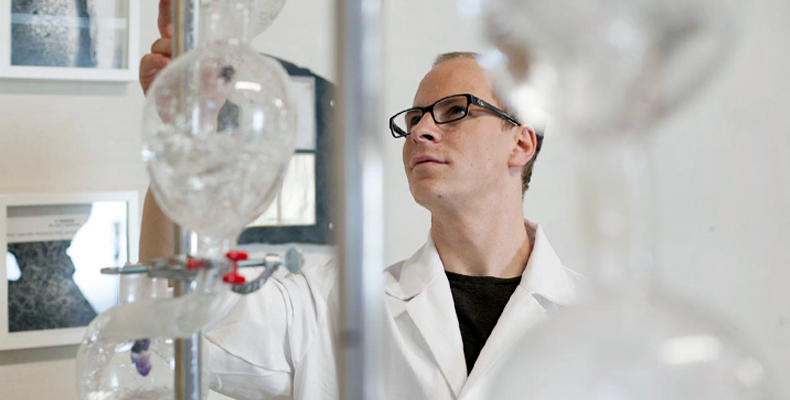 At Sonett, the treatment of water is of essential importance. The entire processing water (at present approx. 10,000 l per day) is passed through a swirling unit. The free-flowing water passes through 12 egg-shaped glass vessels and, accelerating its flow, develops into beautifully shaped vortexes.

It is one of water’s mysteries that, wherever possible, it forms swirls. One can find this happening in free-flowing creeks, as well as when water flows out of a pipe or down the drain of the bath tub – and one wonders why water moves in such a complex way rather than flows straight down the drain.

We interpret this as being water’s inherent nature. Water is the essence of all life. It borders between things alive and minerals – no water, no life. Water is not only subject to the physical properties of the ‘dead’ mineral world, but its movements are those of things alive. Compressed by water pipes and hemmed in by straightened water courses, poisoned by heavy metals, hormones and residues of laundry detergents, water is permanently being interfered with and impaired in its natural liveliness.

By facilitating water’s swirling motions, we further its liveliness and vital quality. As far as its chemical analysis is concerned, water remains the same, but its inner cohesion, its cluster structure and energy potential change fundamentally.

A precious stone is centred in each of the glass swirling units, in order for the water to swirl around 12 precious stones and take up their energy. The spagyric crystallization demonstrates that water, once it has passed through the 12 swirling units, has the quality of ’spring water from areas hitherto untouched’. We help water to thus regain its natural vitality. It is this healthy and ’mature’ kind of water on which high compatibility and naturalness of Sonett products are based.

Water, the essence of all life

Why is a steel paper clip able to swim on top of the water without sinking, despite weighing 7 times as much as water? Why does water expand below freezing point and makes pipes burst, yet every other liquid shrinks when passing from the liquid into the solid state? And why do temperatures in desert areas vary between well over 40° C during the day and below freezing point at night?

No other substance, apart from water, is capable of absorbing, for instance, such an amount of thermal energy from sunlight and store it. Equally unusual is the large quantity of heat that water gives off again to its environment when it starts cooling down and then freezes.

Water is anomalous in that its highest density is at 4 °C. One litre of water at said temperature weighs 1000 g, whereas the weight of one litre of ice is reduced to 917 g. Whilst cooling down, water sinks to the ground, so that the lowest water strata’s temperature is 4 °C, with the ice swimming on top.

The fact that steel swims on water has to do with the surface tension thereof, covering the water with a sort of skin. Recent explanatory approaches towards this unusual behaviour claim liquid water to have a structure analogous to that of ice (cluster model).

Just imagine for a second that water was not to be different but a substance with completely normal properties:

The paper clip would sink in water, but, alas, ducks and swans would not be able to swim any more either. The temperature fluctuations between day and night, between summer and winter would be extreme and without compensation and blend. We would have a much-reduced number of creatures on earth and a considerably poorer variety. Lakes would freeze down to the ground and all life in it would be destroyed.

In plants, water containing dissolved minerals rises way up to the highest branches of a tree, defying gravity. In case of sound forests, springs emerge on top of a mountain, not down in the valley. And man is organized in such an impressive way that he has turned his, for instance, 70 kg of body weight – 50 kg of water with 20 kg of solid substances – into a robust and highly flexible ’Homo erectus’.

The fact that water forms a kind of “skin” – in the phenomenon of surface tension – that water rises in a mountain, that heat and cold, i.e. sun and earth, thanks to water, compensate each other in a rhythmic way, is a precondition for every kind of vegetation. These qualities are part of the ethereal world alive. Thus, in water there is vitality within the dead mineral substance, a vital force which is directly effective, turning water into the element of life.

Water as such is not alive, but it is mediator and the essence of all life.

It was as early as the late 1960s that the natural scientist Johannes Schnorr did research on flow analysis at the Institut für Strömungswissenschaften in Herrischried (Institute for Flow Sciences), this being the initial incentive for the development of Sonett’s Laundry Detergents and Cleaning Agents.

In order to assess the quality of waters and drinking water, a method was developed to the effect that the quality of the water is holistically evaluated, in addition to the regular analyses regarding individual substances such as heavy metals, pesticides, and organic chlorine compounds. This is done by means of the drop-picture method (see fig. below). 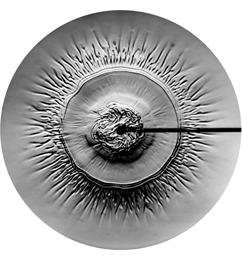 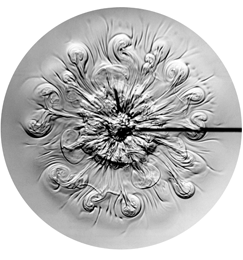 The drop-picture method can tell us something about the quality of the water same being the essence of all life as well as foodstuff. Thanks to this method, Johannes Schnorr was able to prove the existence of surfactants in the drinking water. These surfactants were primarily to be found in residual laundry detergents and cleaning agents, which could not be degraded in nature or only to a certain extent. These residues were to be encountered in groundwater as well as in lakes and rivers where they caused enormous accumulation of foam at dams and sluices. It was only much later that laws were passed requiring minimum degradability.