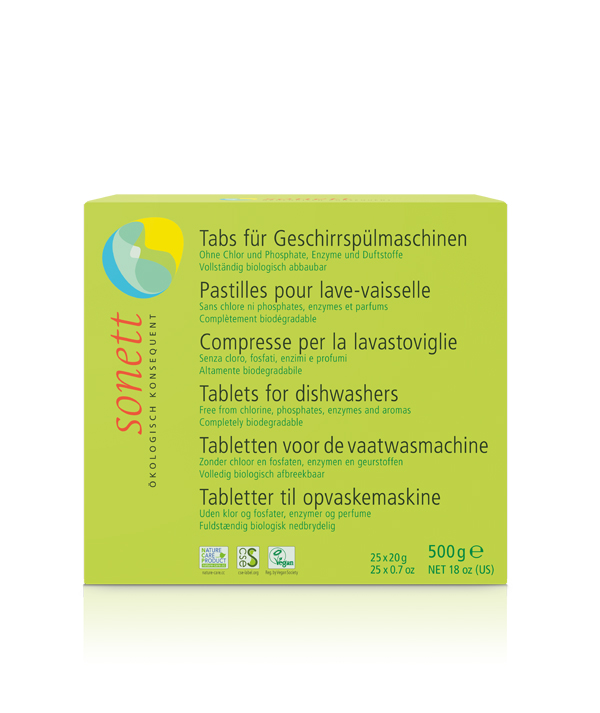 The Sonett tablets contain minerals and organic constituents which are completely biodegradable. They contain no enzymes, no aggressive chlorinated bleaching agents, no phosphates, and no fragrances.

Indicated for all types of household dishwashers.

Only to be used for dishwasher-proof crockery.

Indicated for all types of household dishwashers.

Crockery with normal level of dirtying:
1 tablet per washing cycle

Adjust the built-in water softener in your dishwasher to be 8 °dH (German degrees) above your local water hardness.

For doing so, please consult the Instructions for Use of your Dishwasher.

Information about the dishwasher and setting of the ion exchanger ‣

Always keep the compartments for the Regenerating Salt and Clear Rinse replenished.

Origin and properties of the ingredients

The main active ingredients in Sonett’s Tablets for Dishwashers are sodium carbonate, silicates, and sulphated castor oil. Silicates are obtained by fusing sand with sodium carbonate and, thanks to their alkalinity, are capable of modifying grease on dishes by saponification, thus making it water-soluble. These silicates make stuck-on food leftovers swell, thus loosening them. Sodium carbonate, manufactured from common salt and lime, disperses the grease into fine droplets, thus supporting the fat-dissolving property of the silicates. By adding small amounts of sulphated castor oil, the surface tension of the water is reduced, resulting in the dirt being wetted more easily by the water. Sulphated castor oil, also called turkey-red oil, is obtained by the direct reaction of castor oil with sulphuric acid. In addition, the tablets contain bleaching oxygen (sodium percarbonate). During the washing cycle, sodium percarbonate releases oxygen, in addition to water and sodium carbonate. The oxygen thus released serves to remove tea and coffee residues from glasses and cups. Sodium percarbonate is a molecular complex obtained by hydrogen peroxide adsorbing on to sodium carbonate. Citrate, obtained by fermenting sugar-containing by-products such as molasses, is added to the dishwasher liquid to bind lime in the dishwashing water and to protect the machine from deposits. Due to the fact that, despite built-in ion exchangers (water-softener devices) many dishwashers still feed too much calcareous water, the citrate is intensified by the lime-binding properties of sodium gluconate, carboxymethyl inulin, and tetrasodium glutamate diacetate. Sodium gluconate is the sodium salt of gluconic acids naturally occurring in honey and fruits. Carboxymethyl inulin is manufactured by the carboxy methylation of starch inulin extracted from chicory roots. Tetrasodium glutamate diacetate consists 86% of renewable natural products containing starch and sugar.

Keep tightly closed and in a dry place.

Silicates and sodium carbonate are mineral substances which in nature need no further decomposition. Citrate, a substance present in plants, animals and humans, is completely degraded by nature within 2 to 3 days, thanks to microorganisms naturally present. Sodium percarbonate, during the washing and bleaching process, disintegrates into mineral soda, water, and oxygen, thus leaving the dishwasher in a state which requires no further degradation; i.e. bleaching and degradation are one and the same process. In the manufacturing process of sugar surfactants and sulphated castor oil, constituents are extracted from the plant-based raw materials starch, sugar and fat, but remaining intact in their natural structure. This makes it quite easy for the microorganisms to 100% degrade these surfactants very rapidly. Citrate, carboxymethyl inulin, tetrasodium glutamate diacetate, sodium gluconate, sugar surfactants, and sulphated castor oil are classified as being readily biodegradable according to OECD.